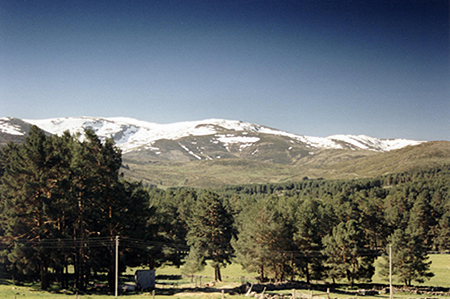 One hundred kilometers from Cebreros is Gredos, the quintessential mountain range in the province of Ávila and a tourist focus for nature lovers and rural tourism. It stretches for more than a hundred kilometers, from San Martín de Valdeiglesias to the region of Béjar. The Central Cordillera of the Iberian Peninsula serves as a separation for the basins and plateaus of the rivers Duero and Tagus. In its intermediate sector, at the southern end of the province of Ávila, and as a heavy and impenetrable granite wall, rises the Sierra de Gredos. The maximum height of the set is the Pico Almanzor, of 2,592 meters. Around it opens the natural space of the Park and Regional Reserve of the Sierra de Gredos, of great beauty in its landscapes and with a great variety of flora and fauna. The most famous places are the Laguna Grande, a place dreamed of by any tourist but only available for those who endure a climb of several hours of trail; and the Circus, both of glacial origin. from where you can see the highest points of the Central System, such as El Almanzor (2,592 m.), La Galana (2,568 m.), El Morezón (2,391 m.) and La Mira (2,343 m.). Due to its geographical location, the steep slopes and the different orientation of its slopes, the Sierra de Gredos can be considered a real paradise for flora. The various plant species are distributed in overlapping floors that reach their culmination in the alpine floor, the most interesting of all as it has located a large number of botanical endemisms. There are several itineraries that lead us to the Sierra de Gredos, either to walk through its valleys and mountains, or to visit its towns and artistic monuments. Gredos is a day of active tourism in the middle of nature, between clear water waterfalls, green meadows, pine forests, oaks and holm oaks and the charm of the famous “Gredos Goat”. It is about 3,500 specimens of mountain goat, its most authentic and significant mammal, whose slender silhouette can be admired on excursions to the mountains. We cannot forget other mammals such as the fox, the Iberian lynx, the wild boar or the otter.

The Landscape: One of the most interesting features of the Sierra de Gredos is its morphological configuration, with a violent relief shaped by Quaternary glaciers, sharp shapes such as knives, galayares, towers, hatches, gorges and walls, a spectacular succession of risks, galayos and moraine deposits in the feud of the Hispanic goat.

The orographic scheme of the mountain range corresponds to the classic figure of herringbone, whose main axis is the dividing alignment, from which a series of buttresses or ropes are detached to both sides that separate the different valleys excavated by the erosion, which in their head part are always glaciers. The rivers or streams that in the region are called gorges, that constitute their hydrographic system run by them.

Flora and Fauna: If the relief turns Gredos into a beautiful and spectacular mountain, from a biological point of view its habitat offers us one of the most interesting spaces in all of Western Europe. There are two distinct formations, the North Slope and the South Slope. On the north side the typical plant is the piorno (Genista purgus). The flora is typical Central European. Abundance of grasslands, including peat bogs. On the south side there are piornales in high parts next to alpine pastures. “Melojo” oak appears in the lower parts. (Quercus pyrenaica).

There are several endemics of vertebrates: In addition to the goat, the Gredos salamander, the Gredos toad and the mountain lizard. Among the birds of prey are the black vulture, the griffon vulture, the common kestrel, the black and golden kite, the mousetrap, the goshawk, the golden eagle, the bald eagle and others. Other important mammals present in Gredos are: The hedgehog, the mole, the shrew, the masked dormouse, the topillo, the squirrel, the partridge and the rabbit (lower parts). The fox, badger, hill, weasel, rider and wildcat. In addition it is necessary to add the abundant wild boar.

The Towns: The inhabitants of the zone always settled in the periphery of the massif, without in their interior towns proper never existed. The summits of Gredos were inhabited only by shepherds who transhumantly installed their huts and sheepfolds from July to September, and by local hunters who, without any sporting motivation, sought in the mountain goats a protein supplement to their diet. .

In the integral parts of the Park, besides the hunting and the fishing, it only emphasizes the cattle activity mainly of cattle in the mountain pastures so appreciated in the summer time.

Along with these environmental values, Gredos treasures an interesting compendium of places where history, art and tradition have left an indelible mark. Among all of them, the Roman road of Puerto del Pico and the towns of Candeleda and El Barco de Ávila stand out. In the latter, you can also taste its famous and exquisite beans.

In the Casa del Parque de Sierra de Gredos they have an entertaining and interesting information space. Tel .: 920 349 204.

Hunting Activity: The main species is the wild goat (Capra pyrenaica victoriae). It is an animal designed for the mountain, being in the males its horn a valuable hunting trophy. It is characterized by its sexual dimorphism. The male has large, strong horns. Females are smaller and straighter. The first have an average weight of 90 kg and females over 40 kg. The coat is leonine in color, with the males having black spots that enlarge with age and with the arrival of winter.

There is a Hunting Management Plan of the Regional Hunting Reserve “Sierra de Gredos”. It studies the legal, natural, hunting states of it. There is a General Plan and a Special Plan which includes improvements to the environment, actions on hunting and non-hunting species, the annual wild goat hunting plan, selective hunting and epizootic-sanitary control. An annual census is conducted for both the northern and southern slopes, adapting the hunting plan to the stock and quality of trophies.

In addition to hunting: In addition to the hunting activity you can practice almost all mountain sports from the most classic such as mountaineering to the most modern such as ice waterfalls climbing, mountain biking, cross-country skiing and rock climbing.

Outside the summits and its surroundings, many of the surrounding villages offer the possibility to spend a few days of tranquility with a good offer of facilities to stay, as is the case of Casa Rural Abuela Benita. In addition there is the possibility of making different routes on horseback at any time of the year. For fishing enthusiasts they can also find a complement or alternative to hunting activity.

Spain has many attractions, many of them in the autonomous community of Castilla y León, such as the Cueva del Águila, a cave located south of the Sierra de Gredos in the province of Ávila, 9 km from the municipality of Arenas de San Pedro from the Tiétar valley, on the Romperropas hill and practically on the banks of the Tietar river.

The grotto, also known as the Eagle Caves, is still alive, due to the formations of stalactites and stalagmites that continue to occur due to the humidity of the cave. The temperature inside is constant throughout the year, averaging 20 degrees Celsius. This fact led to its discovery in 1963 by a group of children who saw water vapor coming out of a hole in the ground caused by the difference in temperature of the caves with the outside.

The caves are open to the public every day of the year, from July 18, 1964. The part of the cave prepared to be visited is a large vault that occupies an area of ​​approximately 2 hectares and the environmental conditions inside the Caves are very stable throughout the year, as their temperature is almost always around 20 ° C and their humidity is very high.

Here is a video of the Caves of the Valle de Arenas de San Pedro, Gredos and Ávila: look closely to appreciate the depth of the cave.