Romanesque Church of Cebreros: Museum of Adolfo Suárez and the Transition 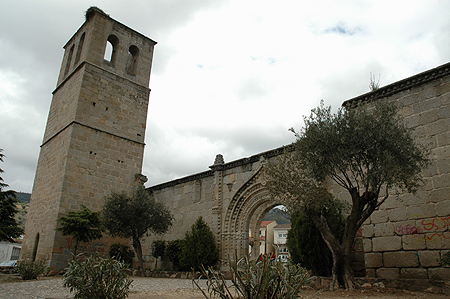 Built from a watchtower, “the Old Church”, it was raised to learn about the Muslim incursions in the 16th century. It is one of the most interesting monuments in Cebreros.

It used to be used as a venue for concerts and hosted cultural events such as The Three Cultures Handicraft Market.

Today it is the “Museum of Adolfo Suárez and the Transition”, which collects all the information on and due to the most beloved and admired Cebrereño. This Museum is conceived as a center for the conservation, study and dissemination of a key moment in our immediate past, such as the Spanish Transition.

Adolfo Suárez is undoubtedly called to become one of the fundamental historical figures of our country. His decisive role in the period that we know as Transition makes him appear as one of the Spanish personalities of the twentieth century and his work bore fruit in the social and political reality that we can enjoy today.

A complex process that had the participation of many people who managed to complete it with full success. The Museum of Adolfo Suárez and the Transition of Cebreros wants to be a tribute to all of them and, especially, to the figure of Suárez in his hometown.

In short, the Museum of Adolfo Suárez and the Transition is a testimony for future generations whose identity will be reinforced by the life and political and social work of one of his most eminent contemporary figures. The contents will be organized by thematic blocks around the main events documented with real images. Thus, it has audiovisuals, sound spaces, photographs, models and panels, and incorporates devices suitable for the disabled. A new way of seeing and enjoying our recent past. It also has an outdoor space for an “outdoor sculpture garden”.

Fun and learning, tourism and culture, leisure and knowledge go hand in hand in a project that is called to play a fundamental role in the future of Cebreros, as an excellent reason to get to know Cebreros and its region.

It should be noted that the Adolfo Suárez y la Transición de Cebreros Museum, already completed its first year, has been supported by a very good acceptance by the public, both in free visits and in an organized group, being these with very diverse characteristics, from schoolchildren for those who have prepared numerous activities that make the visit an educational and fun experience, university students, associations and retirees, who are offered the possibility of choosing between several tourist routes in collaboration with the restorers of the municipality.

Thus, they have the opportunity to enjoy the resources of the environment, such as guided visits to the wineries and monuments, which can be completed with excursions to the Iruelas Valley or the Alberche Valley Nature Museum, in El Barraco.

We also highlight the celebration of activities such as meetings with experts on the Transition to analyze that time, those dedicated to the Spanish language … its integration into the Network of Museums of Castilla y León; the consolidation of the Association of Friends of the Transition; and the implantation in social networks, where the museum has many friends who are informed of the activities.

For the future, the museum plans to hold temporary exhibitions and events that address the years of the Transition from music, cinema or painting of the time. And as indicated by Cristina Blanco, its manager, “we must continue working to strengthen and consolidate the image of the museum for its maximum diffusion throughout the national territory, so that it becomes an important focus of attraction of tourists to our province, contributing to its tourist, cultural and economic revitalization “.

You can visit the Adolfo Suárez y la Trancisión Museum site by opening the following link:

Here you can watch the presentation video of the Adolfo Suárez Museum: