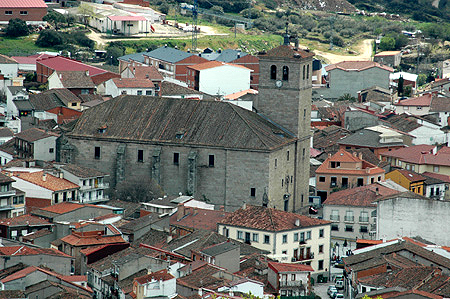 The majestic Church of Santiago Apóstol, declared a National Historic and Artistic Monument, began to be built in 1550 with plans by Alonso de Covarrubias. It is a must-see place of interest for any visitor. It has a floor plan with three naves and the head has the shape of a polygonal presbytery.

We find a central apse, two small side chapels, a sacristy and a tower. Six large Tuscan columns separate the three naves. The granite masonry of the Church is perfect.

There are three exterior covers and one interior that gives way to the sacristy. Between the bodies of the two towers, of which only the one on the side of the Epistle is finished, is the main lintelled cover, and above it within a niche, appears the image of the Apostle James.

Inside, the altarpiece of the high altar of 1625 consists of three bodies and the ridge, the first and second bodies are formed by five streets and the third by three. The gaps are formed by golden fluted columns.

We will highlight in the side streets and in the central one: The Tabernacle, The Exhibitor, a polychrome wood carving of St. James the Apostle, a table of Our Lady of the Assumption, the Christ of Calvary and four restored polychrome carvings of St. Peter, St. Paul, San Juan and San Bernardo. On both sides of the central street are the Mannerist paintings of José Leonardo, finished in 1625.

In the side chapels two altarpieces are conserved, one dedicated to San Antonio and another one, that comes from the old Franciscan Convent, to Santa Teresa.

A confessional with a bicephalous eagle surrounded by the San Francisco cordon is also preserved.