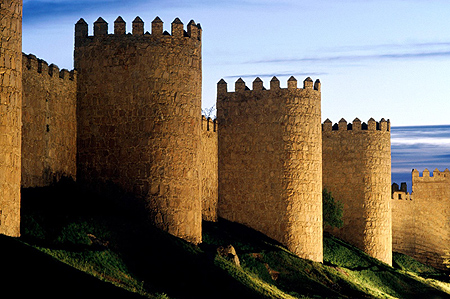 Forty-five kilometers from Cebreros, history, art, mysticism, traditions, gastronomy and nature come together to offer the visitor an enriching stay in Ávila: medieval city of the three cultures declared a World Heritage Site, the city of the Camino de la Lengua , of the Network of Jewish Quarters, which as a result of its fruitful past preserves walls, houses, palaces, temples, convents …

Watered by the Adaja, Ávila rises on a cold plateau at 1,127 meters of altitude, becoming the highest provincial capital in Spain. At the top, its cathedral is located, which is one of the most touristic places because it is the oldest of the Spanish Gothic.

But the image of the medieval city is shaped by its walls, a monument that explains and configures it, a magnificent war apparatus with more than 2,000 meters of perimeter and 88 towers that represent what it was: a walled city.

Ávila is known as the land of songs and saints, such as San Juan de la Cruz or Santa Teresa de Jesús, whom the city remembers every October 15 with the festivities celebrated in his honor.

Ávila, the city of the three cultures, Islamic, Hebrew and Christian, is the starting point to travel through art and tradition. Its ancient past runs through the culture of this city, which is one and there are several. The mystical Santa Teresa de Jesús still walks the streets and with her habit brushes the facades of the historic buildings of a town as old as it is modern, as sober as it is bold.

Of all the cities of Castilla y León, Ávila is one of the oldest. Celtiberian culture was the first to leave its mark: there are the stone boars and the proximity of Castro de las Cogotas, the epicenter of the Vetonian culture. Rome also passed through here and the Arab culture devastated its lands until it was finally reconquered by the Christians.

Tidy and proud, the capital of Adaja combines the old and the modern and invites you to a stroll through its interior from the top of the battlements of the wall that has protected it for centuries and from where you can contemplate excellent views of the city. It is precisely the great walled mountain range that has given universal fame to this town, which attracts travelers from all over the world following in the wake of Santa Teresa and interested in discovering an ancient city that awakens at the dawn of the 21st century. She is the same age as Notre Dame.

The eastern section of its wall is the most attractive and on it rests the bulk of the city outside the walls. The chronicles do not seem to agree on the beginning of its construction, although some documents show that the French Florín de Pituenga and the Roman Casandro were the masters of its geometry. The date on which the first stone of this work of universal engineering was laid is not precisely known, although some chroniclers date it to the 11th century, lasting for nine years.

Nineteen hundred people participated in its construction, most of them Muslim captives. Hence, although the complex is Romanesque, it has important Arab features. The defensive wall, contemporary in its construction with the Cathedral of Notre Dame in Paris, was a determining factor in shaping the urban planning of the city. For almost a millennium it served as protection and was also used to facilitate the control of commercial exchanges.

Rectangular, two and a half kilometers long (an hour’s walk), they have nine entrance gates and more than 2,000 battlements guard, today as yesterday, the skyline of Avila. The Puerta del Alcázar and the one located next to the Basilica of San Vicente, are two important attractions that the visitor should not ignore.

The first Gothic cathedral in Spain: The traveler who wants to enter modern Avila has to do so without haste to calmly savor its streets, squares and corners. It is worth getting lost along the Paseo del Rastro, where a splendid viewpoint towards the Amblés Valley remains unchanged.

Another interesting panorama is the one offered by the north canvas of the wall or the one that can be seen from the Cuatro Postes when night falls, with the wall fully illuminated. Interesting churches are the Romanesque churches of San Pedro, San Andrés, San Esteban, San Segundo, San Nicolás, San Martín or Santo Tomé. Its cathedral temple is considered the first exponent of Spanish Gothic and its main altarpiece, cloister and ambulatory stand out.

If the visitor prefers to get lost in medieval and Renaissance Ávila, nothing better than visiting the Palacio de los Velada, Valderrábanos, Núñez Vela, Polentinos or Dávila. Nobility houses are those of the Águila, Bracamonte, Almarza, Superunda, Verdugo or Los Guzmanes.

Writers in love with the city: It will be the Generation of ’98 that best reflects the spirit of the capital of Santa Teresa. Renowned writers of the stature of Azorín, Pío Baroja and Miguel de Unamuno contemplate the city from the Noventayochista perspective. The universal Federico García Lorca dedicates some pages of youth to Ávila, after spending a brief period of time in these lands. The poets Dionisio Ridruejo and Luis Rosales also took hold of the city of the wall.