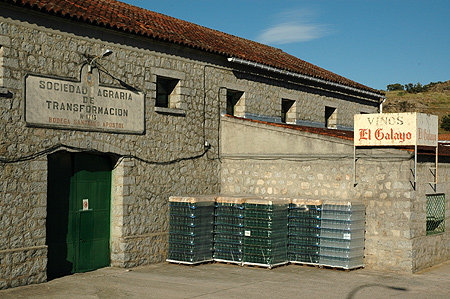 The new PDO Vinos de Cebreros has recently been created, a dream come true thanks to many people: winemakers, winegrowers, hoteliers, hoteliers, artisans, tourism people, all of them united with one goal, the PDO Vinos de Cebreros. And it is that Cebreros has been the wine region par excellence of Ávila. It has an area of ​​more than 1600 km2 where excellent quality wines are produced.

In addition to a whole series of private wineries, some of them can boast of their great renown, in Cebreros three wineries stand out:

The Agrarian Society of Transformation 1.713 of Cebreros, later known as the Bodega Cooperativa Santiago Apóstol, S.A.T. and today as Bodega Soto Manrique, it was created in 1954. It brings together more than 500 members who collect more than 90 percent of the Cebreros grape. Reds, whites and rosés are obtained. Its best-known brands are: El Galayo, traditionally made; and Señorío de Cebreros, wine processed with the most moderate techniques. In addition, new wines belonging to the new DOP Vinos de Cebreros have recently arrived, such as Naranjas Azules and La Viña de Ayer.

The winery created under the initiative of the winemaker Telmo Rodríguez and the pilot Carlos Sainz: Viñas Viejas de Cebreros, stands on the ruins of the old town of Santa Leonor and is a commitment to quality. They make a wide variety of wines, from young wines to Gran Reserva wines, such as Pegaso Barrancos de Pizarra 1999, a red crianza, Garnacha variety, from 14 hectares located on the southern slope of Puerto de Arrebatacapas, at an altitude of 1200 meters. It is the garnacha grown at the highest altitude in Spain destined for a family winery with a long tradition and linked to the evolution of the Cebreros wine industry.

And it is that the wine of Cebreros has been cast among the best in the world. there is the example of the second harvest in the vineyards of Rubén Díaz, which with the Grenache from this area was able to produce a wine, ‘El Reventón’ 2008, which has become one of the most coveted.

Robert Parker has awarded this broth 97 points, the same points obtained by other wines that may be better known in the market, such as the Vega Sicilia Único Reserva from the year 2000, the Dominio de Pingus Amelia from 2007 or the Numanthia Termanthia from 2007. This is highlighted by Rubén Díaz, owner of the two vineyards in which the grape with which ‘El Reventón’ has been made has grown and which are part of the El Barraco Cooperative, which also makes other wines such as’ Arrebatacapas ‘.

We are talking about old vines, grown in height, which grow on slate soil and whose fruit is used ecological production systems, without chemical products. Thus, ‘El Reventón’ is a “very mineral, very elegant and silky” wine, according to the owner of the vineyards, who acquired them in 2006.

In 2007 the first harvest was obtained and, a year later, a very low production was registered in the two vineyards, of about 800 or 900 kilos. Specifically, the production filled a 500-liter French oak barrel; that is to say, approximately, for about 600 bottles, when the estimated production, in a normal harvest, can be around 4,000 kilos.

The award, in addition to placing the wine in the world, has caused a “sensation”, especially since it is the second vintage. In Rubén Díaz’s opinion, this is an incentive to continue working, since “Cebreros has been playing for some time”, since “the market is turning to other varieties” that focus more on the terroir and the characteristics of each area.

As for the variety of the territory, the Garnacha, is a grape that costs the middle sector of the market, because it is not an easy wine, although there, in its day, the Catalan Priory sneaked in and “now it is Avila’s turn” .

Not in vain in the area 12 or 14 “quality” wines are already produced, which open up new possibilities for winemakers and winemakers. “The limit is set by the vineyard,” concludes Rubén Díaz, noting that the usual production of ‘El Reventón’ will be around 2,000 bottles.

Another notable wine from the Rubén Díaz and Orlando Lumbreras winery is Groove, to which Rober Parker has awarded 93 points. In the same winery, which is located in the heart of Cebreros, other wines of the highest quality are produced, such as La Cuesta del Tejar.

It is important to highlight the possibility of visiting some wineries, where wine tastings and guided tours are held.