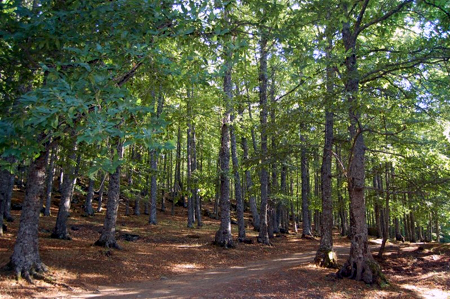 El Abuelo, located in the Castañar de El Tiemblo, is a patriarch with a long history. It is a Chestnut (Castanea sativa) with a height of 19 meters and a perimeter of 16 meters that is more than 500 years old. Its trunk is completely hollow, offering us a spooky and fascinating image in equal parts. It is the most extraordinary chestnut tree in the downtown area, a plant monument that resists the passage of time.

Due to its proportions, the Grandfather is a reference among the trees of the province of Ávila. Its name is recurrent in Spanish forests. This huge chestnut tree stands out in the middle of a closed forest formed by a multitude of juvenile tree specimens. Once at his feet, the battered trunk is discovered, punished by successive fires, provoked to hollow its interior in search of a refuge.

Luckily that happened and it seems that Grandpa will live a long time, because its proportions are a reference among the trees in the province of Avila. For his age he has been a privileged witness to the history of these peculiar Iberian forests. Chestnut trees were revered by primitive European cultures. Domesticated to obtain the nutritious harvest of its reddish fruits and the advantages of its noble wood, it was the Romans who distributed them over much of the Iberian Peninsula.

Feeding on their domestic cattle and their slaves, the virtues of their firewood have survived to this day. For centuries, man kept these fertile forests in good condition, exploiting them to obtain both materials. The abandonment of the countryside caused such customs to be forgotten, entire forests being cut down.

Nestled in the heights of the Yedra ravine, in the west of the Central System, almost in the Sierra de Gredos, the place is a recurring area for those who visit nature. Here is located the recreational area of ​​Regajo del Castañar, located right on the edge of the forest. It is advisable to visit it at any time of the year, but it must be acknowledged that it is in autumn when it displays all its strength, especially due to the chromatic contrast of the chestnuts with the oak, serval, holly and pine groves in the area. It is from these dates when the area receives the largest number of visits. The appearance of mushrooms and, above all, the ripening of the chestnuts, along with the beautiful autumn colors with which the trees are dressed for a couple of weeks, are the reasons that justify this influx of visitors.

El Abuelo rises in the center of the forest, where other monumental chestnut trees are scattered, such as the Prado Hueco couple or the Resecadal couple. Our tree is located a short distance from the refuge of the Dehesa de la Villa, nestled at a crossroads which is reached from the aforementioned recreational area in a relaxing and productive half-hour walk, as while in other nearby chestnut groves, like that of Casillas, the collection of chestnuts is forbidden, here being a public forest it is still allowed to pick them.

The road to the chestnut grove leaves from the Avila town of El Tiemblo, which is accessed by the N-403 road between Ávila and San Martín de Valdeiglesias. Take at the entrance from San Martín (past the gas station on the main street), the road that goes to the Hinchona reservoir, continue until the end. Following the dirt track, and avoiding any ascending and clearly secondary detour, we arrive first at a source, and then at a kilometer, there is a detour with indications to two recreational areas. We must choose the path on the left, in the direction of the recreational area of ​​El Regajo del Castañar.

At about 300 meters, in summer and on weekends a passage control is installed, in which they will give us directions, a garbage bag and they will take our registration number. At present, a maximum number of visitors has not yet been established in this natural space. After the control, the street becomes an asphalted track, although with important potholes, and slightly ascending, that advances of parallel form to the throat of the Ivy by a young pine of repopulation. From the checkpoint to the recreational area of ​​El Regajo, where we must leave the car, about seven kilometers await us. At two kilometers the battered asphalt makes its way to a wide dirt track, well compacted, but with a lot of boulders and some streams that hinder our path. Gradually the pine forest gives way to chestnuts and oaks that begin to mark the edges of the track.

Just two hundred meters later the track opens to the right with a small parking lot and some tables that offer us the opportunity to eat a good tortilla if the weather allows. To get to El Abuelo, from the recreational area, you have to cross a gate that delimits the extension of the forest and after about 500 meters then take a dirt track that starts on the right. Through it you can reach the Dehesa refugee.