THE DEFENSIVE WALLS OF ÁVILA 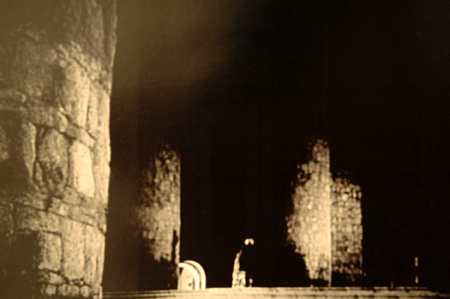 The Walls are the universal symbol and the most outstanding monument that the city of Ávila welcomes. Its importance is derived from being the best preserved medieval walled enclosure in Spain and probably in all of Europe.

It is not surprising that since March 24, 1884 it was declared a historical-artistic monument, and later on August 8, 1991 its surroundings were.

Origin of the Walls of Ávila

What originated from a military destination has become a tourist attraction and, as in the case of photography, a film set for Orson Welles’s Midnight Chimes.

Although the origin of the Walls is Roman, it is considered fundamentally Romanesque work, although there is little controversy about its dating and time of construction.

The traditionally known version indicates that the works began on May 3, 1090 after the blessing of Bishop Pelayo. The authors would be, according to the Avila legend, the “masters of jometry” Casandro Colonio and Florín de Pituenga (also the Navarrese Álvar García). The first would be Roman and the second French. Under his orders, 2000 men would intervene, which would take 9 years to complete.

More recent studies defend a later dating (mid-12th century) for the Romanesque construction of the Walls.

Ávila saw the start of the works on its walled enclosure, probably on the eastern side, a place that is more difficult to defend due to its flat character. Here the remains of the Roman Wall and materials from the Roman necropolis located next to the Plaza de San Vicente would be used. The large Roman granite ashlars are perfectly visible at the base of the canvas.

It would continue to the north, based on smoothed masonry and rubble.

In these two canvases, the most important defensively due to the orography of the terrain easily accessible to the enemy is where the width of the walls is greater, reaching three meters and with a height of 12 meters, the cubes are separated twenty meters and with a thickness of 6 meters and eight meters protrude.

The west and south flanks would be the last to rise and although they are consistent with the rest, the walls are less height and thick, as well as a greater distance between the cubes, probably because the orography offered better defense.

The construction figures speak for themselves of its greatness. It has an almost rectangular perimeter of 2,526 meters. It has nine gates, four shutters, 88 cubes or turrets (30 on the north side, 12 on the west, 25 on the south, and 21 on the east), 2,500 battlements, nine gates, and three shutters. The height differs somewhat from one section to another, although it is highly homogeneous, with an average of 12 meters.

The factory is made of courses of large granite stones of great regularity, almost like ashlars, which offer a magnificent smooth exterior cut. Among them, there are many smaller ones embedded in mortar. The brick hardly appears as a material, so, although Mudejar workers were involved, the work is of pure European conception and execution. The grayish tone of the granite is softened with some golden tones acquired with the cold and the sun of many centuries.

Every corner of the enclosure is full of semi-legendary stories that give it life and personality. The imposing Wall of Ávila has nine arches with a common historical objective – to allow or prevent access to the interior of the town – but with particular legends behind its walls.

Route and description of the Wall of Ávila.

We will start the tour through the Puerta del Alcázar, directly facing the most lively and busiest square in the city, the Mercado Grande, just in front of the San Pedro temple. It was the first to be built together with that of San Vicente and it preserves its Romanesque execution. Its name comes from the fortress that stood behind it until 1927, when it was destroyed to raise the building of the Catholic Monarchs.

It is small and has a semicircular arch, being framed by two huge towers of more than 20 meters high, joined at the top by a semicircular arch bridge, located in this way to surprise from above and from the rear any invader who get ready to approach the door. Its current appearance dates from the reconstruction carried out by Felipe II in 1596.

Walking north along Calle de San Segundo we come across the great fortified Romanesque semi-drum apse of the cathedral, the so-called “cimorro” “, which, seen from the outside, looks more like a military bulwark than the shelter of the cathedral altar.