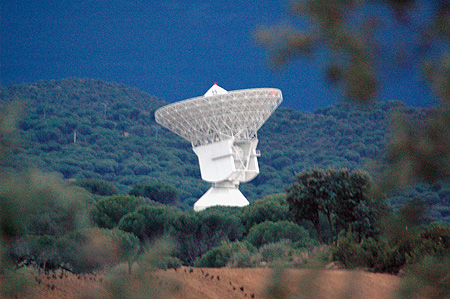 Cebreros starred in Venus Express Orbit Insertion. The goal was to get the spacecraft to slow down relative to Venus so that it would be captured by the planet’s gravity. The maneuver took place without setbacks on April 11, 2006.

For Vicente Gómez, director of ESAC, this Cebreros deep space satellite tracking station houses “the most important of the missions and makes ESAC an international reference center for the science and exploration of our Solar System.”

In our opinion, although the entrance to the enclosure is not allowed, it is worth approaching this place of interest to be able to contemplate its dimensions and to enjoy in addition a wonderful landscape.

Click here to download the pdf file of the news of the Award granted to the European Space Agency.

Currently, data recorded by the ESA spacecraft on Mars, Mars Express, during the descent to the surface of this planet from NASA’s Phoenix spacecraft have been received at the European Space Operations Center in Darmstadt, Germany. The ESA deep space antenna located in Cebreros, in Ávila, and managed by the European Center for Space Science and Astronomy (ESAC), in Madrid, has also played an important role in the operations.

The European Space Agency has thus completed an essential phase of its ongoing collaboration with the Phoenix mission, with the reception at ESOC (Darmstadt, Germany) of the signals emitted by this spacecraft and recorded by ESA’s Mars Express.

In addition to Mars Express’ contribution to Phoenix’s success, ESA’s 35-meter antenna in Cebreros, Avila, has also played a key role in this recent landing on Mars. Cebreros, one of ESA’s two deep-space antennas – dedicated to communications with missions in very distant orbits or interplanetary probes – has been used during the approach to Mars phase, and during the entry, descent and landing phase, for accurate location measurements of the Phoenix spacecraft in collaboration with another NASA deep space antenna.