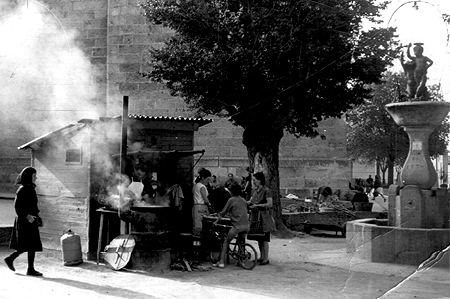 Cebreros was a land of Celts; possibly the vetones put the seed of what today is our locality; from the time of the Roman Empire we can mention that there was a large granite bull that was on the banks of the Alberche and was the boundary between the province of Tarragona and Lusitana.

The first true historical reference of which we have evidence dates from 1301, year in which Fernando IV yields to his uncle, the infant Don Juan, the Villa de Cebreros; Towards the middle of that same century the Old Church was built.

In the sixteenth century we have to locate the economic outbreak of Cebreros, because its geographical location made it a transit area of ​​the Imperial Road from Toledo to Valladolid for traders and ranchers. At that time, glass and wooden foundries were built that once supplied the Monastery of El Escorial. This period of economic splendor was slowed down in the eighteenth century by a severe crisis.

Of the XIX it is possible to emphasize the construction of three mills for the manufacture of paper pulp and one for the manufacture of tanning and the proliferation of warehouses since it is at that time when the operation of the vines begins to have major relevance. In the twentieth century began the abandonment of field work, industries emerged and became the second home of migrants and many tourists for weekends and holidays.

Cebreros was the place where the final text of the Concordia between Isabell the Catholic and its brother Enrique IV of Trastamara was written up that would give rise to the famous Treaty of the Bulls of Stew by which Isabel was heiress of the Crown of Castile.

Adolfo Suárez, for his work in the Spanish Transition and other historical figures have given rise to the history of the town.

As cultural figures, Cebreros has prominent artists and writers, such as D. Hermenegildo Martín Borro and A. Moreno Espinosa. Both give their names to the local schools.

The Nobel Prize for Literature, Camilo José Cela, wrote in this town the fifth and final version of La Colmena. Felipe Doyagüez Chico as a finalist for the “Rielo de Poesía Mistica” award and the painter Félix González, among others.