The Guisando Bulls of El Tiemblo 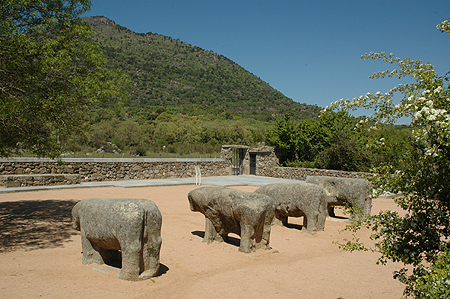 Returning from the eastern massif of Gredos, we must not miss the opportunity to visit the famous Guisando Bulls, sculptures in the shape of boars, pigs or bulls (as there is still no unanimous agreement today), which remain anchored on earth as witnesses of the culture that built them. Los Vettones, a town of Celtic origin that populated the provinces of Ávila, Salamanca and Portugal before the arrival of the Romans, left us multiple stone boars of rough relief that are still preserved today in various forts and towns in the center of the peninsula. Perhaps the best examples we have here, because they tend to be presented in a more isolated way, and here we have at least four copies.

For those eager for historical knowledge, located on the slopes of the Guisando hill, a place of transit for the herds of the mesta, there are the aforementioned Guisando Bulls, three Iberian stone sculptures dated in the 3rd century BC. reminiscent in their shape of three bovines.

The Bulls are an essential part of the archaeological heritage of the community. Some historians say that the Bulls witnessed how Enrique VI named his sister Isabel La Católica Queen of Castile, back in September 1468. Although at the moment, it is unknown what was the main purpose of these granite constructions, it is said that they could to be indicative and protective images of the fields from which they were embedded.

As a curiosity, one of these boars shows a Roman inscription: “Longinus Prisco Calaetico Patri FC”, although its chronology could well be established in the 3rd century BC.

Contemplating these granite stone blocks anchored in the ground for more than two millennia, causes a strange sensation, which dwarfs the duration of our lives in the face of such timeless landmarks. A good place to end this route, and take some photos with these imperishable symbols of our culture and the history of Ávila.

“And the Bulls of Guisando, almost death, almost stone, bellowed for two centuries, tired of stepping on stone.” (Federico García Lorca in Cry for the death of Ignacio Sánchez Mejías).

There are several legends about the Guisando Bulls, in addition, the aura of mystery that surrounds the figures makes them very important pieces for the study of peninsular boars.

To get to them we must take the national road that connects San Martín de Valdeiglesias with El Tiemblo, and about three kilometers from this second town, take a detour marked on the right hand side, which takes us in a scarce two kilometers to Los Toros. Right in front of it rises Mount Guisando, the first elevation of the Gredos mountain range in this part, and on its slopes you can still see the remains of the Jerónimos Monastery, now privately owned. The landscape is made up of ash meadows, rich pastures and lush riverside vegetation. It is a protected area with beautiful landscapes.

The Guisando Bulls are permanently open to the public and are not subject to time restrictions.