Carnivals and other popular festivals in Cebreros 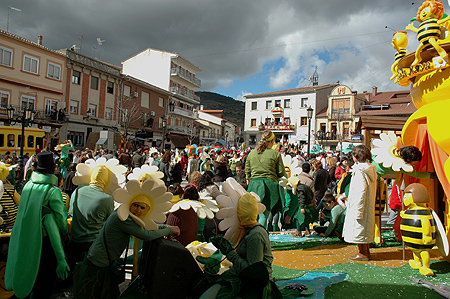 On designated dates, Cebreros complies with the tradition by celebrating:

Its popular carnivals in the month of March. Carnivals are held on Sunday, Monday and Tuesday, forty days before Easter. They have been recovered on Ash Wednesday -Entierro de la Sardina- and on Piñata Sunday. The pagan festival of disguise allows visitors to let their imagination run wild to come up with the most original idea.

Its ancestral pilgrimage on the first Sunday in May, the whole town goes down to the Valsordo Chapel to enjoy a wonderful day in the field in honor of the Patron Saint of the Villa;

The festivities of the Virgen de Valsordo from August 14 to 17. Its popular bull runs are famous;

And, of course, the harvest festival that usually starts in the last days of August and ends in October, depending on the maturation of the different crops. It is important to highlight the Pisa and Grape Cutting Contest that is held annually at the beginning of the harvesting season and that consists of cutting, weighing and treading the fruit in pairs and in a rhythmic way to obtain as much must as possible. Attendees can taste the first must of the year, accompanied by some good local buns and various performances.

Cebrera folklore stands out for its great variety, with jotas, Seguidillas, corrucos, mazurcas … thanks to lutes, bandurrias, guitars, bones, castanets …

The most important manifestation of folklore takes place on Carnival days and if there is a tradition rooted in Cebreros it is, without a doubt, Carnival. The music of the brass bands, masks, costumes and good humor are capable of infecting an increasing number of spectators with all the magic of one of the most famous festivals in the province.

From a car “mad” from the 1920s, to the Tree of Wisdom or the story of Alice in Wonderland. It is almost a year of work that is behind each float, in which it is always about looking for the greatest showiness and originality.

Camilo José Cela used to say that Cebreros is a“carnival of the winery, flower bread and loin in the gut, a round of dancers in the plaza and masks adorned with the skin of the wolf, the antler of the deer and the wing of the caudal eagle”.Almost sixty years have passed since he gave the proclamation of festivals and in this time the way of decorating the Carnival has changed. The rags of trunks and lofts and the masks with animal features have been exchanged for luxurious masks that are more reminiscent of the Venetian tradition or for voluminous floats in which the imagination is allowed to fly to always make an impact on the increasing number of spectators who He goes to Cebreros every Piñata Sunday to witness the provincial parade.

What is left of the party of yesteryear is that popular atmosphere that fills bars and restaurants, the rondón costume, the shawl and the dance of the ring in the square, the wine and pasta, and all the color and fun they leave behind. in the street the numerous groups that participate in the procession, sometimes looking for spectacular costumes and others with the mocking and ironic air that Carnival always had.

The Cebreros carnivals are one of the 90 Festivals of Tourist Interest in Castilla y León. They take place on Carnival Saturday afternoon, before Ash Wednesday, the celebration begins with parades and brass bands, a proclamation by a famous personality in an activity, fireworks display and dances enlivened by orchestras. On Sunday morning there is a parade of floats and comparsas, led by the municipal band, in the afternoon people gather in the Plaza Mayor, where the typical Cebrera jota called‘El Rondón’ o ‘wheel dance ‘, where they wear both the different costumes typical of the carnival and the typical clothes of the municipality.

To take a closer look at Cebrera folklore, open the following video: