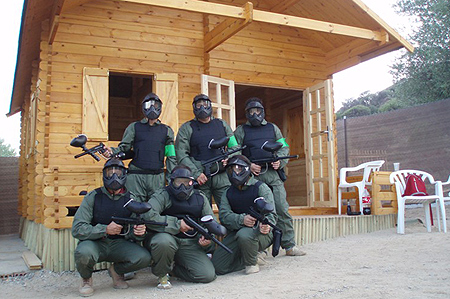 Paintball is a sport of strategy, exercise and team play that takes place outdoors in direct contact with nature.

The game usually takes place with two teams that perform different competition missions. In various scenarios they must fight to get the central flag, or to steal it from the opposing team. They can also participate in the assault on the castle or its defense … and many other fun strategy missions. In none of our games are violence or aggressiveness encouraged, but teamwork and fun.

The number of players on each team can vary, limited only by the size of the playing field. To make the game fun, it is recommended that the minimum number of participants be 6 and the maximum 32.

There is no time limit for the game, it all depends on how many games you want to play. Paintball in Hoyo de Pinares (temporarily closed) is located 5 kilometers from Cebreros. The collection is made in the town square, although you can go with your own car. Comfortable clothing is recommended, for the relief of the fearful, the paint comes out with a normal washing in the washing machine.

The price per game includes the rental of the complete equipment * for the game with a first load of 100 balls and the personalized attention of a monitor.

Consumption costs € 1 (soft drinks, beer or water). A barbecue or paella, about 16 or 18 euros per person.
If you accept any type of accommodation package plus activities that we offer, you can enjoy a 10% discount on this activity and all the comforts of Casa Rural Abuela Benita, Cebreros – Ávila.

Delete players: Two teams face each other with no other objective than to eliminate the other. Is used as“heating” advance and become familiar with the markers.

Hostage Rescue: Start the game with two hostages from the opposing team at each base. Teams have to safeguard their prisoners and rescue their own. A hostage can only be saved by putting his team’s armband on his arm. When a player is saved he can get the marker of an eliminated teammate or a teammate in play.

If at least one of the rescued hostages reaches their base, the team will have won.

It is important to follow safety rules to prevent problems.

It is mandatory to wear the mask throughout the game. Once eliminated, continue with it until you reach the neutral point or base.

The established limits cannot be exceeded. The player who passes them will be eliminated.

No non-Paintball material may be used or carried during the games.

In case of aiming at less than 8 meters, do not shoot, informing the target that he is eliminated. the player who does not respect this rule is responsible for any damages that may occur.

Scaring or shooting outsiders or animals is prohibited.

The organization is not responsible for accidents caused by: non-compliance with these rules, the terrain, animals, travel or the effects of the weather.

Paintball in Hoyo de Pinares has temporarily stopped working, but there is another field in Rozas de Puerto Real:

They have INFERNO, TIPPMAN 98 AND TIPPMAN BRAVO markers, fed with compressed air or CO2 and shoot paint balls that when hitting a body explode, leaving a pronounced stain after impact. In addition, they have special overalls for the practice of paintball, a different color for each team, in order to differentiate the enemy. Protective face masks are thermal (glasses with double glazing and an intermediate air chamber for greater protection) and protect the entire contour of the face (eyes, nose, mouth, cheeks, ears and chin).

The chest and back protector, like a bulletproof vest, protects the chest and the entire back from impacts from balls fired at close range and the neck protector is designed to always protect the entire neck contour. Gloves are also provided to protect hands and fingers against possible scratches, blows or impact.
Paintballs are made from a hardened gelatin coating and oil filled with food coloring. They are soluble in water, 100% biodegradable, they are harmless and the stain that it leaves after impacts on the body disappears with water.

For groups of 10 people, the price is € 20 – 10% discount. The game lasts until all 100 balls are consumed. There is the option to buy extra chargers.

They can also opt for El Barraco paintball.